Imagine presents the results of Silicon Valley 2018 at Google HQ

Tonight, 19th of July, took place the closing Ceremony of Imagine Silicon Valley 2018 at Google HQ, where the 12 Dreamers presented 4 projects ideated in a van cruising three states of USA (California, Nevada and Arizona) and developed at the most innovative hub in the world, Silicon Valley. 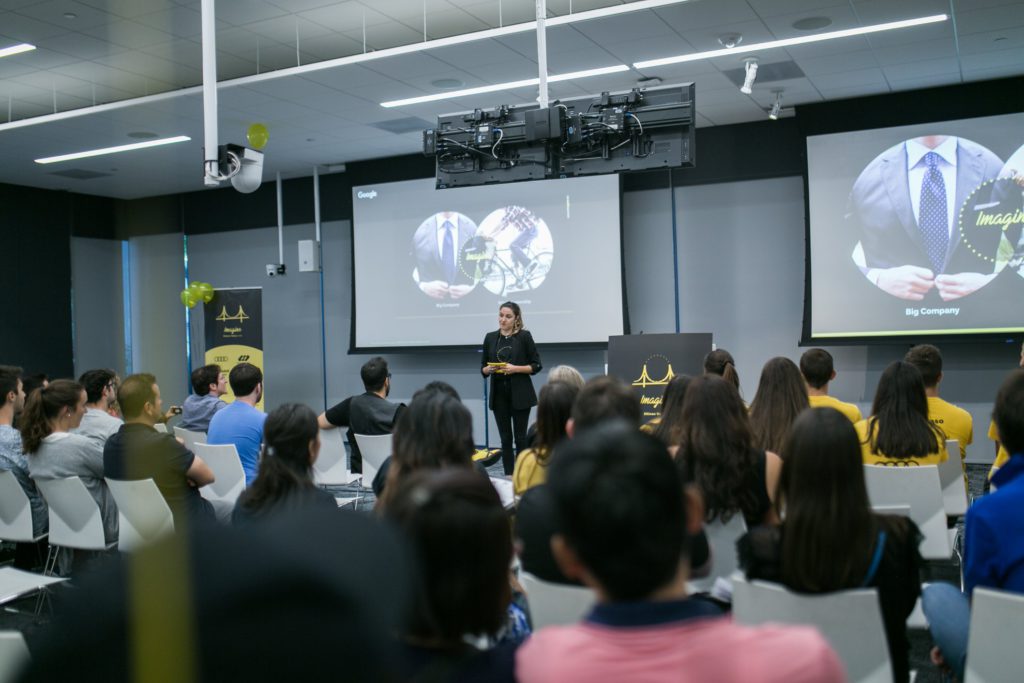 Google opened its doors to the 12 Dreamers of the 8th edition of Imagine Silicon Valley to present the results of the projects they had been working on during the month of July in the fields of Culture, Connected Cars, Education and Entrepreneurship. What’s the future going to look like in 2030? How’s going to be like commuting in self-driving cars? How can we democratize education and make it accessible for everyone? How to foster the entrepreneurial mindset amongst young students?

In order to tackle down this challenges we got together 12 brights minds, winners of different talent contests all over Spain, and brought them together into our innovation center in California. But this year, instead of spending the whole month in Silicon Valley as we used to do, we prototyped a new format inspired by the trips that Imagine has organized in different countries all over the world such as as Imagine Latam , or Imagine Express, where traveling has proven to reinforce the coexistence between the participants and transforms their diversity into a lever of innovation. By literally getting out of their comfort zone, they receive new sources of inspiration that lead them to create disruptive solutions.

For that reason, this year we started in Los Angeles (Kick-Off) where participants met for the first time. Once teams were formed, we took our vans and hit the road to get started with the Inspiration and Ideation phases of the Lombard Method along places such as the Route 66, Grand Canyon, Death Valley, Mammouth Lake and Yosemite; till we reached our final destination, Silicon Valley.

Once we arrived, we settled down at our Creativity Center in San Mateo, working on the third (prototyping) and fourth (communication) phases of the Method. During this time we made the most of this unique ecosystem and visited some the most innovative companies in the world (Google, Facebook, Twitter, Apple, etc.), took official workshops at universities such as Stanford and received feedback from experts in innovation and technology.

The challenges and the projects presented were:

The Dreamers Rafael Rodríguez (InTech), Elena Andritchi (WomenCeo) and Javier Labrada (Universidad de Oviedo), presented “FUTURE.ME”, a personal and transformative journey to your future that starts in the past. The experience will take place in a customized truck where people can reflect about their past, capture the present and project their own future with the help of customized content that recreated future scenarios of your interest.

The main goal, apart from disrupting the current spectrum of cultural exhibitions, is to offer a positive view about the future and encourage people to take action in building the future world in which they want to live in. 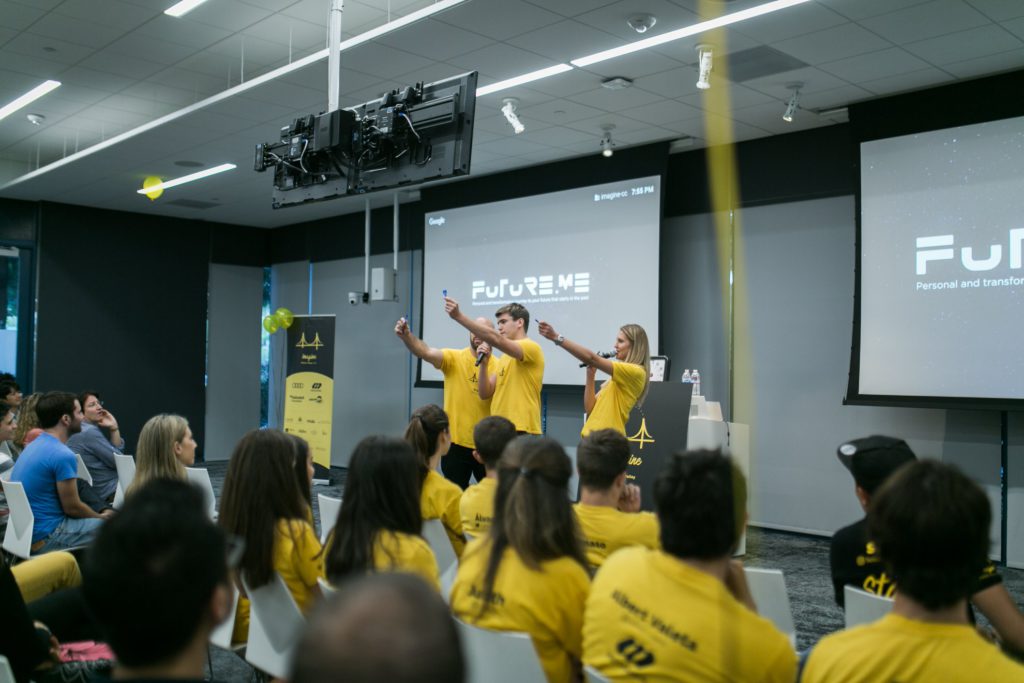 This is a first approach to their vision of future smart cities, where cars will take care not only of our safety on the road, but to help us make the most of the opportunities that our surroundings offer us. 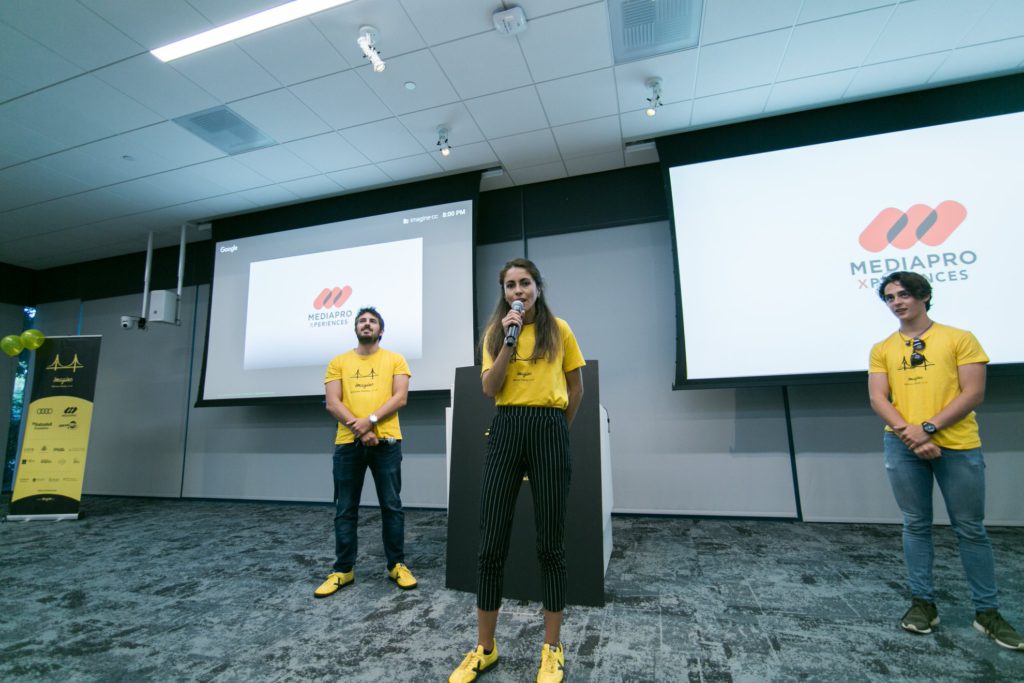 The DreamersDiana Ballart (Universitat de Girona), Dámaso Moreno (EDEM) and Álvaro Belmonte (Universidad de Alicante) worked on taking one step further the massive event that took place last November in Barcelona where +7,000 participants competed ideating innovative solution to challenges proposed by 4 big corporations. The three dreamers proposed transforming the event into a LEAGUE that would take place in different countries around the world that will culminate in a big event and a stratospheric final four at the Kennedy Space Center.

The synergy is perfect when you combine Academic Knowledge, Young Talent and Big Corporations, and it has a big impact in young talent, as well as in companies that need to innovate. 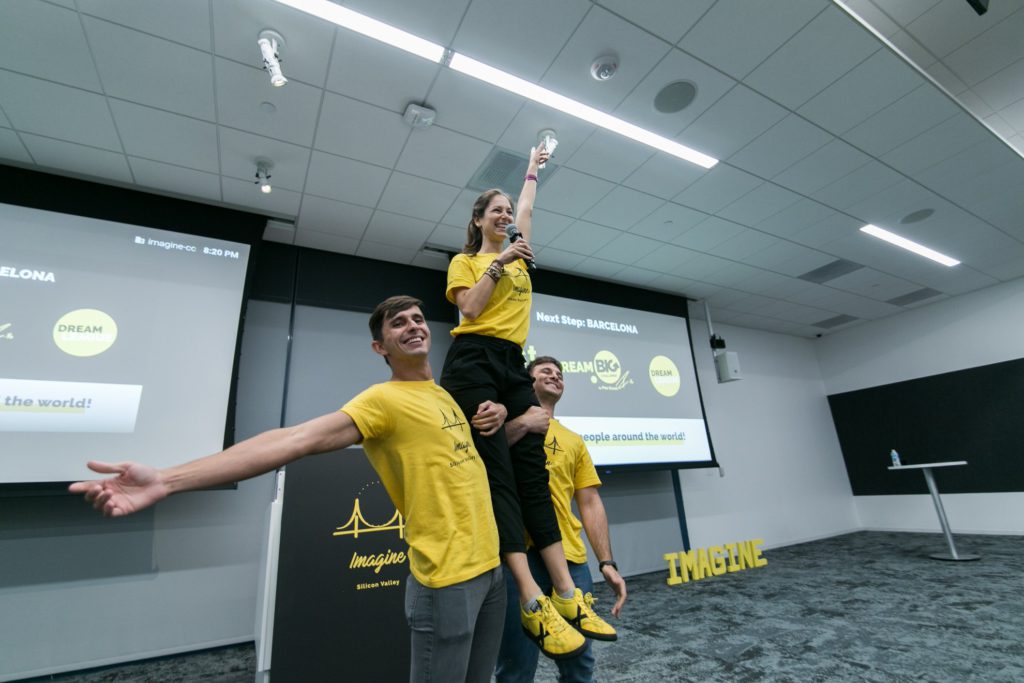 Education (Audi) – ¿How to democratize education and bring it poor areas without resources?

The dreamers, Paula Lamas, Nalú Rodríguez and Clara Pantín, were the winners of the of the 3rd Edition of the Audi Creativity Challenge amongst +300 participating teams with their project Globed, which wants to bring education to all over the world and connect students from radically different cultures through a magic book, GlobED. The book contains a projector which allows children in refugee camps and poor countries access videos from different subjects recorded at schools all over the world in English; and it also has a camera that allows children to have video conferences and learn from each other.

They are planning to create a Foundation and they are working on their first prototype with a refugee camp in Greece.

We also had some great speakers such as Mario Chamorro,  Strategic Growth Manager at Coursera and a “Happiness Hacker” who gave us a talk about how to increase our levels of Happiness and live a healthier life while doing what we love, such as working on our projects with talented people. 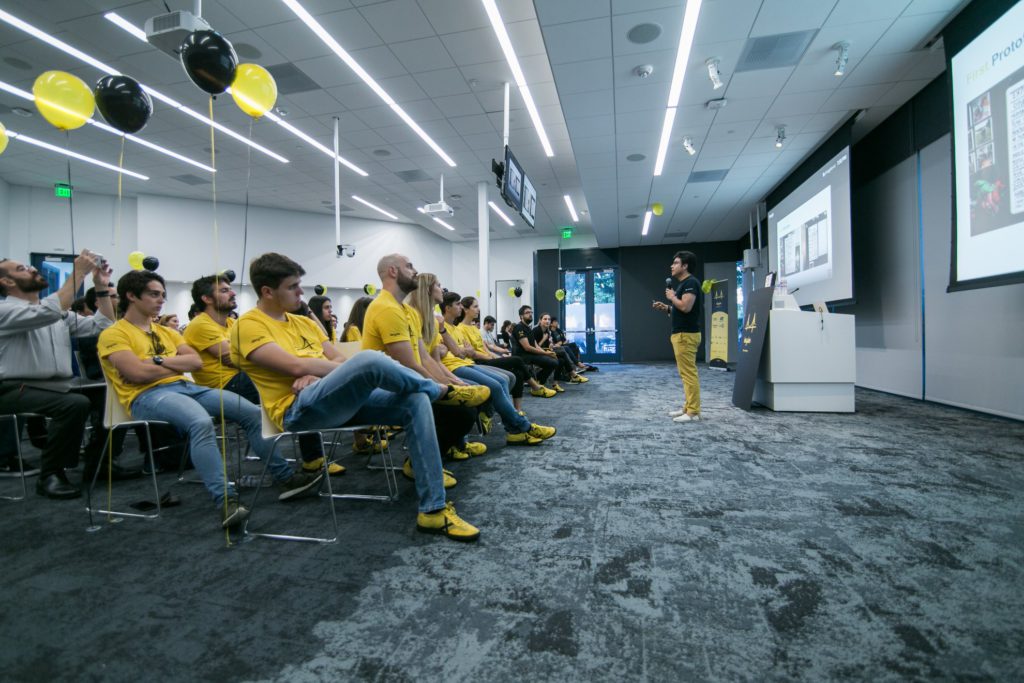 Jordi Ortiz, our host at Google, and the Strategic and Growth Manager at Google, also dedicated some words of encouragement to our Dreamers. 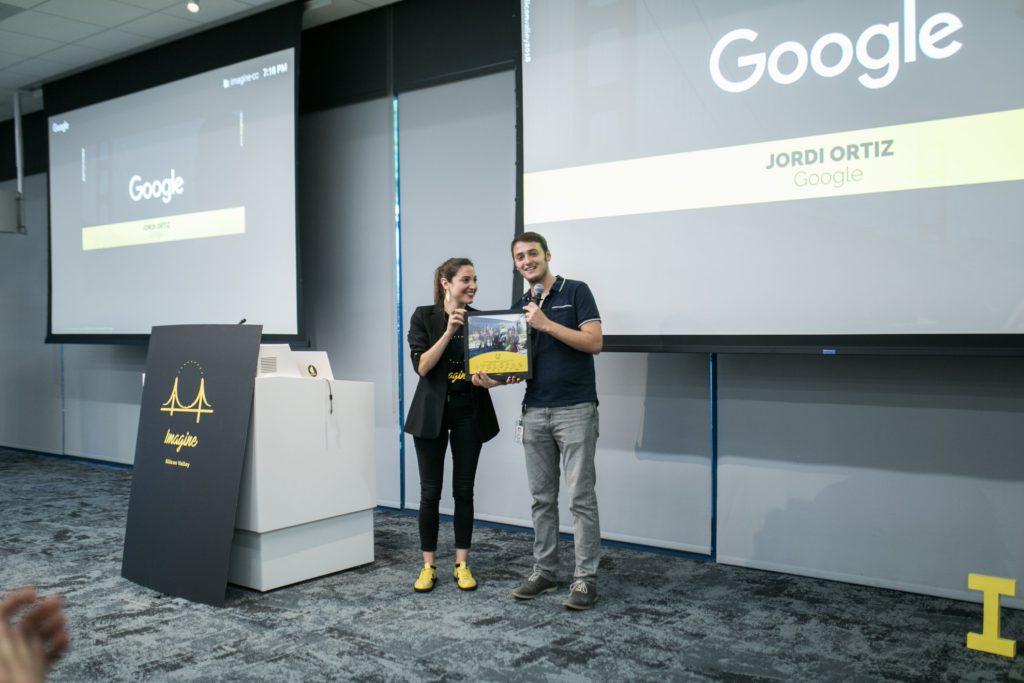 Imagine is an Innovation Center founded by Xavier Verdaguer in the Silicon Valley of California in 2011. Imagine has developed and curated its own innovation methodology called Lombard Method, based on the principles of Design Doing (used by Start-ups) and applies it to solve the challenges that big corporations confront. Imagine organizes innovation trips where the participants (called Dreamers) develop disruptive solutions for challenges proposed by big companies like Audi, Ikea, Banco Sabadell, Suez, Cuatrecasas, Fluidra, Grupo Sura, Mediapro, etc. Nowadays Imagine develops innovation programs in different countries (Imagine Express, Imagine Latam, Imagine Africa, Imagine Italia, Imagine Japan, etc.). In Imagine we believe that a better world is possible. In order to develop solutions to the problems society faces, it is necessary to create diverse groups with shared values that follow a working methodology and entrepreneur attitude.

Mediapro is one of the most important audiovisual groups in Europe. With a presence all over the world, the company provides technical and creative solutions in order to create and broadcast any audiovisual product.

Born from the merger between two communications groups, Mediapro and GloboMedia, the Mediapro Group os the leading European company in audiovisual content and unique in its integration of content with production and distribution services.

The Banco Sabadell Foundation was established with the purpose of stimulating excellence and promoting knowledge and culture.

The objective of the Foundation is to promote outreach, training and research activities in the educational, scientific and cultural fields, as well as to encourage and support young talent. Throughout its existence, it has contributed to promote activities in these areas and has also established itself as the organizer of the prestigious Banco Sabadell Foundation Award for Biomedical Research and the Economic Research Foundation Award.

The Audi Creativity Challenge is a competition in which we challenge you to transform the future of our society by developing your most creative ideas. How? Create a team of 3 companions and look for a good Driver that helps you to be better. Your challenge will be to find solutions to innovate in the education sector. If your idea exceeds all phases and ends as a winner, you will enjoy a unique experience in Silicon Valley to fully develop your project following the Lombard Method.